In 1617 the Scots Parliament passed an Act authorising the removal of the church from Thirlestane Castle. This did not take place until 1673 when the Duke of Lauderdale engaged the king’s architect, Sir William Bruce and the king’s master mason, Robert Mylne to design and build the new church on the present site – by legend an arrow distance from the Thirlestane Castle building.

In view of the many alterations made from time to time it is difficult to picture the church in its original simple form. Extensive alterations were made in 1820. In 1864 wood floors, gas lighting and pews were renewed; in 1904 alterations made to provide for the choir. The church was renovated inside and out between 1969 and 1973 when an in-depth maintenance programme was completed, including harling the outside walls, as part of the tercentenary celebrations.

Building work to make safe the foundations and to re-enforce the building, plus the addition of a modest extension began in 1986 and was completed two years later. The Session house became the Church Centre. The exterior of the church was repainted in 2009.  The churchyard is no longer in use; burials now take place in the cemetery a quarter of a mile east of the church. A Garden for Reflection sits at the rear of the church. 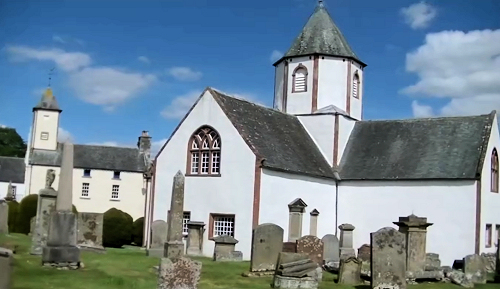 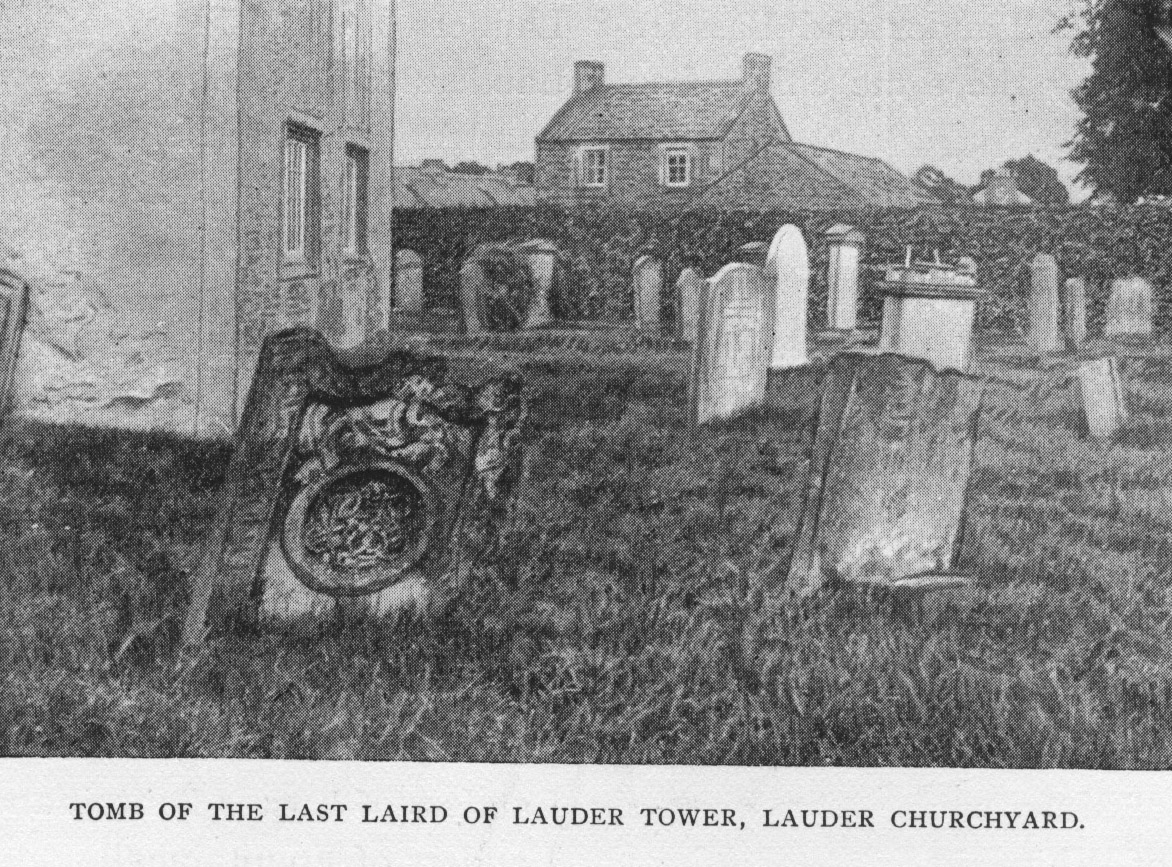 The first of these is known as “The Lauderdale Silver” and dates from the late 17th Century and consists of two silver cups and a matched pair of silver flagons. The Lauderdale Silver was added to in 1766 when two further cups in the same style as the original cups were commissioned by the heritors. Together the four cups and the two flagons represent some of the sacramental plate in Scotland.

The second category consists mainly of pewter. The United Free Church, which became the West Parish Church until it was suppressed in 1954, would have fallen heir to a pair of pewter plates having started as the property of the original Free Church in Lauder.

Thereafter the communion vessels and pewter dishes were gifted to Channelkirk. In addition to the plates are a baptism bowl and plate, three other plates and a pair of alms dishes.

Recognised far and wide as one of the finest ecclesiastical buildings in Scotland and registered with Historic Scotland as a category A listed building (1673), the church is cruciform in plan, in the shape of a Greek Cross with the pulpit in the centre under the bell tower.

Each arm of the cross is equal in length. In the centre, supported on four square pillars joined together by rounded arches, is an octagonal bell tower with a pointed roof. In its original form the church consisted of a Queer (choir) to the east in which there was a holy table at the far end. Opposite this was a nave, with transepts to the north and south.

The nature of the seating originally provided, if any, may have been fixed forms. In 1789 proper seating was fitted to the Queer but proved insufficient for the needs of some, leading to the addition of two lofts one by the then Marquis of Tweeddale, the other early in the18th Century by the Scott family of Trabroun. It was subsequently enlarged as was the Burgesses loft.

There were no porches in the original building. The doors, opening straight into the church, were placed at the corner where the choir and the north transept join (these
are now replaced by a small window in each doorway). Diagonally opposite were two more doors, one into the nave, the other into the south transept. (no longer visible).

Of the four lofts (galleries), only two were in the original design; above the nave and above the north transept.

The alterations which have taken place since the original construction include the following:

Two lofts having been added at different times during the 18th Century(above the queer and the south transept), access to the Lauderdale Loft (nave), and the Burgh loft (north transept), which had originally been from outside stairs, was brought within the building in 1820.

It was at this time that the vestibules were built with new doors cut, leading into the four isles and stairs were built up to the lofts; the old entrances were filled in and two new windows created. Various alterations were made to the seating plan and a new arrangement for The Lord’s Supper which brought the Communion Table into the centre of the church.

Wooden floors were laid and gas lighting installed and the pews renewed in 1864.

The church was renovated inside and out between 1969 and 1973 when an in-depth maintenance programme was completed including harling the outside walls, new mullions, oak doors and tri-partite windows; all as part of the ter-centenary celebrations. In 2006 the floor of the church was carpeted and disabled access improved.

In 2009 the exterior of the church was repainted.

As you stand facing the Communion Table raise your eyes to the gallery which now houses the pipe organ. This gallery (above the East Aisle) is called the Tweeddale Loft, built by the Marquis of Tweeddale who owned land to the north of the parish.

The gallery on your right (above the South Aisle) is the Trabroun Loft, possibly installed by the Scott family who owned the small estate of Trabroun to the north of Lauder. It is the smallest of the lofts.

On your left is the Burgh Loft (above the North Aisle) which gave seats to the Burghers of the town. It was used by the previous Town Council to the Royal and Ancient Burgh of Lauder but now on only a few occasions by the Community Council for civic purposes held in the church.

On Common Riding Sunday the Ex- Cornets occupy these seats at the
Kirkin’ O’ the Cornet. Behind you is the Lauderdale Loft (above the West Aisle) where the Earl of Lauderdale has his pew. The loft remains in use by members of the Maitland – Carew family, resident at Thirlestane Castle.

The fine oak doors were made and fitted in 1973 by a local joiner, funded largely by donation. The Communion Table was the gift of the McDougal family in memory of their son. Please feel free to wander throughout the church. There are a number of memorial donations and records of those fallen in battle.

The Cradle Roll is attached to the wall opposite the pulpit. 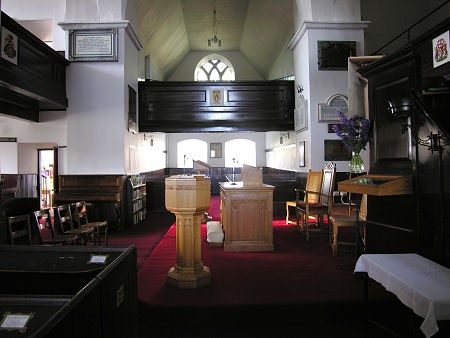 The organ now situated in what was the Trabroun loft was built in 1903 by the Aberdeen organ building firm of EH Lawton for the John Knox Church, Mounthooly, in that city. Although a small organ of nine stops only, the opening recital included the Sonata in D minor by Guilmant. This was discovered from a small scrap of the original programme used as packing for a pipe-stopper during the rebuild in 2004/5.

Clearly the organ was found to be too small for the church so it was rebuilt in 1912 with the addition of another two stops. So it remained until it was removed to Cairns Church, Cowdenbeath, in 1975 and rebuilt in the style
of that time by Galloway and Wright.

After the closure of that church, the organ was eventually removed and stored by David Stark of Nenthorn, Kelso who rebuilt the organ in situ. The restricted space and the rake of the gallery meant a number of alterations to the size and layout of the instrument. This in turn had a knock on effect with some of the mechanism redesigned.

New bellows, swell box and windchests for the pedal organ were made. The 1975 case of painted chipboard was discarded and the new case in stained chestnut designed to be lower in the centre. This allowed some light from the window at the back of the gallery to penetrate. The console has a CCTV monitor fitted to allow the organist to see the action in the church. 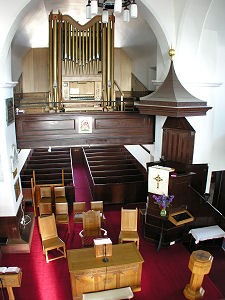 All original parts of the organ were refurbished. The tonal design of the rebuilt instrument attempts to be as versatile as possible in what is still a small organ. The pipework of four and a half stops is original Lawton. The
manual action is mechanical and the pedal is pneumatic. The project was initiated and the organ dedicated by the Rev. John Shields as part of a recital by organist Brigitte Harris from Edinburgh.

The church bell (still in use each Sunday) bears the Lauderdale Arms along with the following inscription:

The weight of the bell is uncertain, but is said to “hold six bushels”. 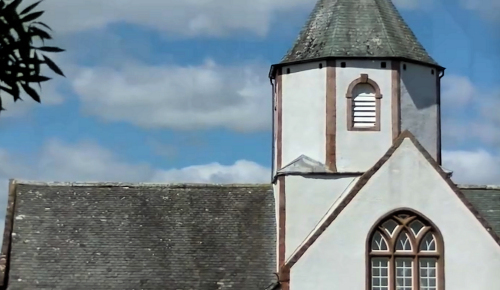