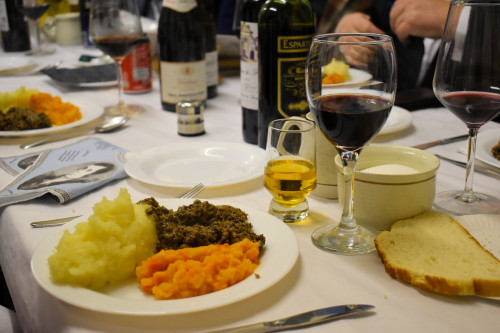 ‘The annual BURNS SUPPER attracts around 100 people from Lauder and Oxton. Programmes for the Burns Supper date back to the early 1970s when the Supper was held in Lauder Public Hall. The Supper later moved to the Tea Room in Thirlestane Castle. In both venues members of the church prepared and served all of the food with the programme of entertainment also by local talent. Limited accommodation resulted in a further move to the Carfraemill Hotel at the turn of the century where, by way of kind and generous support from the proprietors all food is provided by the hotel. Over the years entertainers have come from across the Borders but the event is hosted always by members of the church. All income from ticket sales is divided half to the charity Blythswood Care and half shared between two charities (one local and one national) named annually by the Kirk Session. Each year this event raises in the region of £1500 for these charities.’